If had to sit down and think about it, my mother by herself was enough to ruin the joy in any child’s life. In between the lines of each of these posts, I could write a novel on the things my mother did to make us miserable. Because even though I was free from the abuse, I was never free from her. I spent the next eight years of my life under a roof with her evilness. That would be enough to drive any child to insanity, and yet she had to get another boyfriend.

Disclaimer: I wrote this in 2013 to share my testimony with the world in the hopes of helping other children faced with abuse. Most times, you will be the only person to advocate for a child that cannot stand up for themselves. Children in abusive situations are taught to conceal every aspect of abuse, so if you by chance are able to see something, it may be the only opportunity for rescue a child has. Please take the appropriate steps to report child abuse. I have since rewritten and updated these posts to make them more understandable and up to my current writing standards.

Meeting our dad for the first time in 7 years

Shortly after my mom’s boyfriend left, she reintroduced us to our real father. Even though she had spent years convincing us he was horrible, I don’t think I had ever been more excited.

We met him for lunch at a fancy restaurant in Seattle. I walked in not knowing what he looked like and trying to figure out who my dad was. When I first saw him his back was turned towards us, but once he turned around my memories started to flood back to when I was a toddler and he was my hero.

I ran to him, gave him a hug and never wanted to let go. I don’t remember what we talked about that day. We got ice cream afterward and he told us he had made reservations at the Space Needle for dinner. But when my mom saw the excitement on our faces, she said no without hesitation.

The first of many disappointed summers

That summer, instead of going to Portland to our grandmother’s we boarded a plane and went to Utah to spend time with our dad.

I have to back up here and say, during the seven years we weren’t allowed to speak to my dad, my mom still did. She chased him for child support and when he would ask her if he could speak to us she would tell him he could– only if he sent more money. I truly believe this changed my father’s mindset and it has stuck with him until this day. He began to believe that if only he had enough money, he could talk to or see us. So he became addicted to working.

My dad worked and lived in the hotel he managed. So we stayed in a suite for the summer. The hotel had a pool and my sister and I spent the summer teaching each other how to swim. We were unsupervised 95 percent of the time we were there. My dad provided a room and food for us, but we were on our own.

Being so young, it didn’t phase us as much the first time. Going from no freedom to all the freedom in the world blindsides you. If we wanted to walk to the mall, we asked for money and left. If we wanted to go somewhere, my dad would have a friend take us because he had to work. I don’t remember my dad going anywhere with us.

Although our abuser was gone, we tried our best to never tell anyone what had happened. Including our dad. We pushed it under the rug and moved on trying to never bring him up again.

At the end of the summer, my dad was supposed to drop us off at the airport for our flight home. But instead, he told my mom he was keeping us. A fight between them ensued and my grandmother and mother had to drive from Washington to Utah to come and get us.

Going into sixth grade, I was determined to act like a “normal” kid. I had spent my entire school existence so far ostracized. It didn’t help in the third grade when my mother chopped all my hair off, leaving me with 1.5-inch hair, coke bottle glasses, and no friends.

My mother was never one to teach me life lessons, so when I was finally able to watch TV- I learned everything I could. My social skills were terrible, I was afraid of everyone, even though I did my best to not show it. I started watching what other kids did and then did my own version, trying very hard to not copy.

I soon made some friends, who I wouldn’t approve of for my children, but I was happy to finally have some.

And then there was Kathleen. I had met her in the third grade when we were in a third/ fourth-grade split class. I stole her stuffed panda and made her trade me her jewelry box to get it back. She lived just a street down from us. When we were younger whenever we were allowed to go outside we would find her. My sister, Kathleen and I were like the three amigos.

Want to remember this? Pin this to your favorite Pinterest board:

With my abuser gone, Kathleen’s mom (Carolyn) would ask our mom if she could take us places and do things with us. Being around Carolyn I was almost always in total awe. I was fascinated by the way she loved her kids and spent time with them.

She would sacrifice anything she had for her children. Even though she was a single mom and didn’t have a lot, she would spend money on my sister and me and take the time to pour into our lives. She was my hero. I couldn’t believe that people like her even existed in the world.

Coming from what I went through, I was terrified of all adults. And I remained scared until I became an adult. Even though I was scared of Carolyn, I was still comfortable around her.

My sister eventually opened up to them and told them what had happened to us. And even though I wanted someone to know, I was angry with my sister. I never wanted anyone’s pity. But they never treated us any differently. I could tell that it hurt them to hear about it but their love for us never changed. I had never been as close to a person outside of family as I had to Kathleen and Carolyn.

Shortly after our abuser and my brother were gone, my mom sat my sister and me down. She told us that if she ever started dating again she would make sure that we approved and that he wouldn’t move in right away. She didn’t apologize for what happened. I’m not sure what her intentions of the conversation were. But she definitely didn’t keep her word.

In the middle of sixth grade our downstairs neighbor, who we had gotten pretty close to had a brain aneurysm. She survived but was in need of help so her brother came into town to help her. His name was Bruce. He and my mother became close very quickly.

After a week or two of him being in town, he seemed to have more and more of his belongings at our apartment. Until eventually he was just there all the time.  He seemed nice so we didn’t really mind. We, of course, were scared that history would repeat itself, but we soon became somewhat comfortable around him.

Just because my abuser was gone, didn’t mean I would experience a happier life

When it came close to the end of my sixth-grade year, my class started talking about going to sixth-grade camp. I had figured since my brother and sister had both went, it was a given that I would go too.

I took the camp paperwork home and my mom told me that she had other plans. She was going on a vacation with Bruce to Disneyland. Before I could get the words out to ask if we could come to, she told me that I would be going to Portland with my grandmother.

I felt like this was a right of passage that I was missing out on. While at my grandmother’s house I was so angry that I convinced myself that I was on my own in life. And I would just need to figure things out for myself. My survival mode kicked in and I told myself that when my mother came back to pick me up, I would do whatever I could do to not depend on her for anything. I had to realize that all she cared about was herself and not her children.

When I sit in darkness,

The LORD will be a light to me.”

Would you share this post? I’m writing this series in hopes to help someone. You never know who’s suffering, whether that is an adult who is trying to live in the aftermath of abuse or a child that someone can help, they just need a push to do it.

Next Post:  My Testimony | From Surviving Relentless Abuse to a Blissful Life | Part Ten

I recently had the pleasure of doing a podcast interview! You can check it out here:

8. My Testimony | From Surviving Relentless Abuse to a Blissful Life | Part Eight

7. My Testimony | From Surviving Relentless Abuse to a Blissful Life | Part Seven

My Testimony | From Surviving Relentless Abuse to a Blissful Life | Introduction

Why I Rededicated My Life to Christ

How to Mom When it’s not Natural

For updates on when my next post is live in this series please subscribe to my blog.

Please feel free to share this, my hope is that through my brokenness I can save other children from abuse.

Are you a victim of abuse? How can I pray for you? 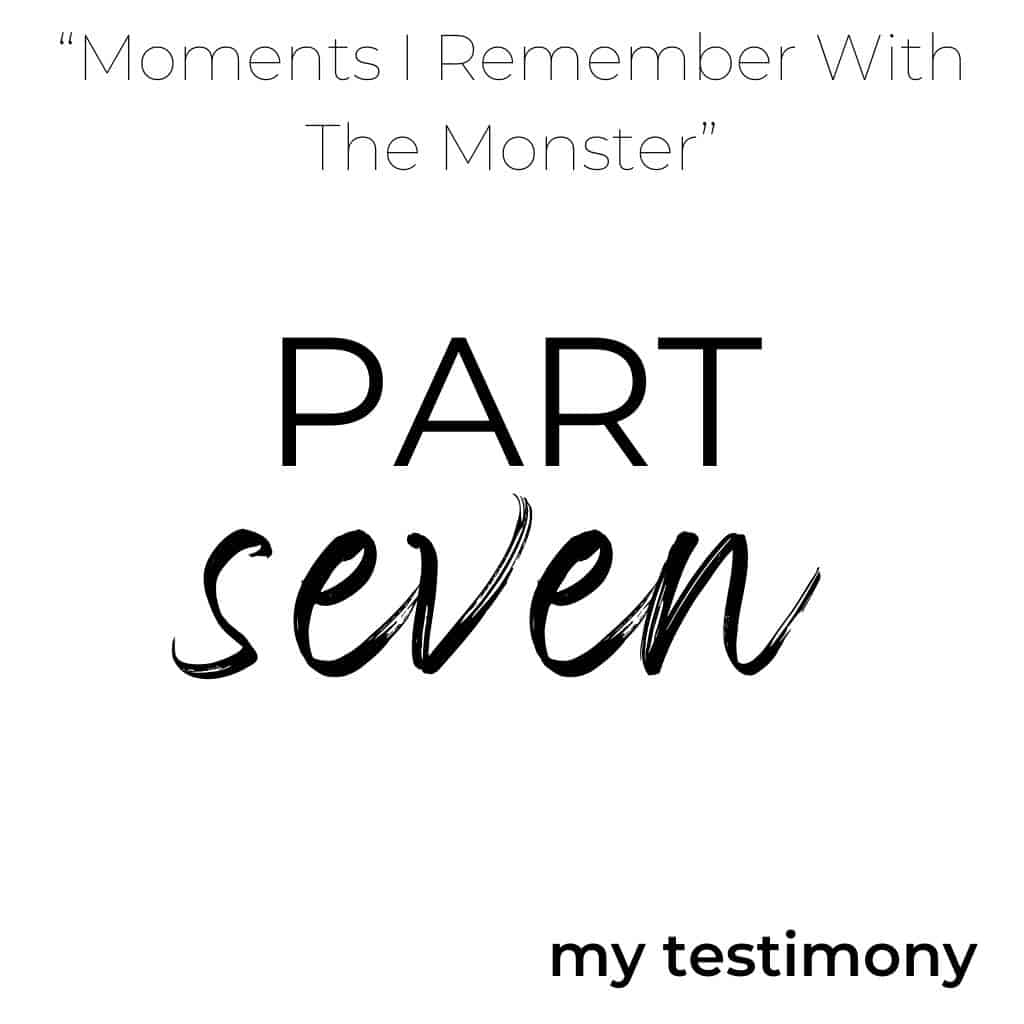 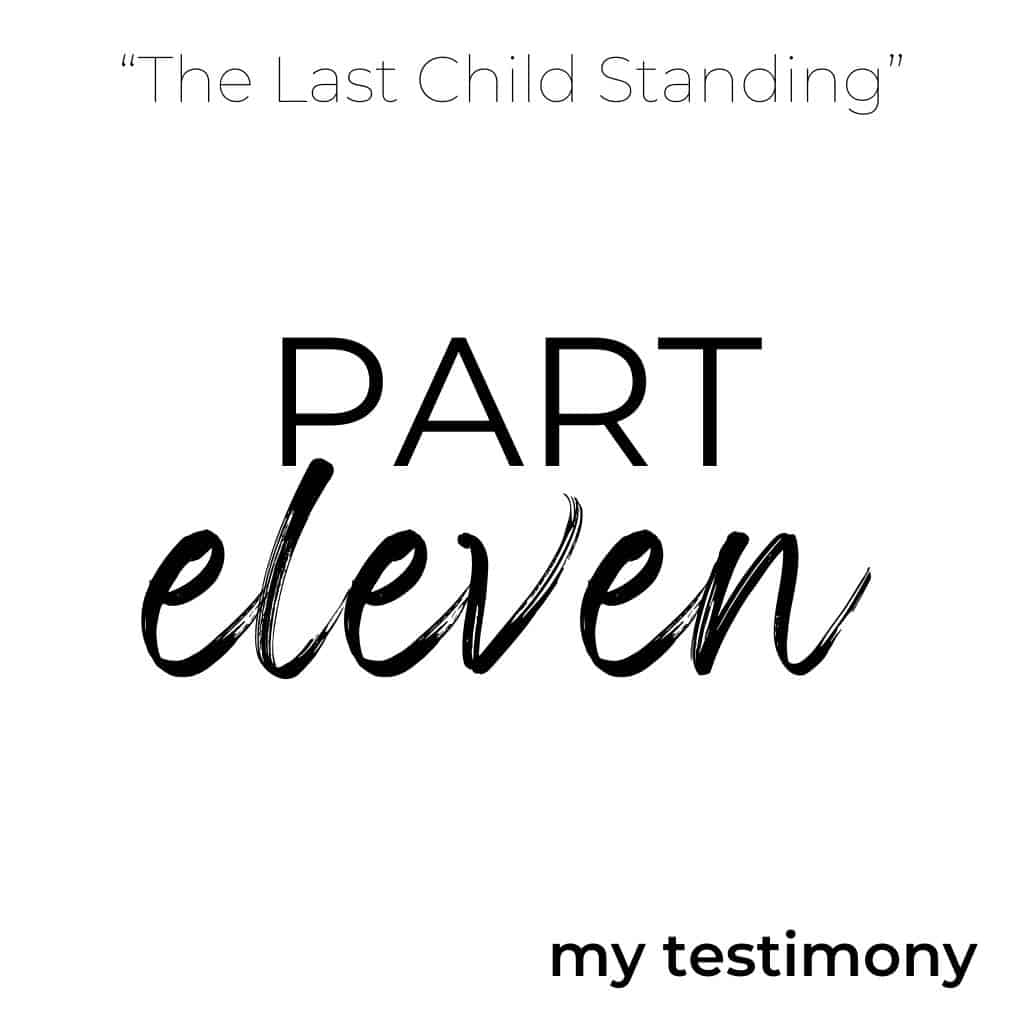 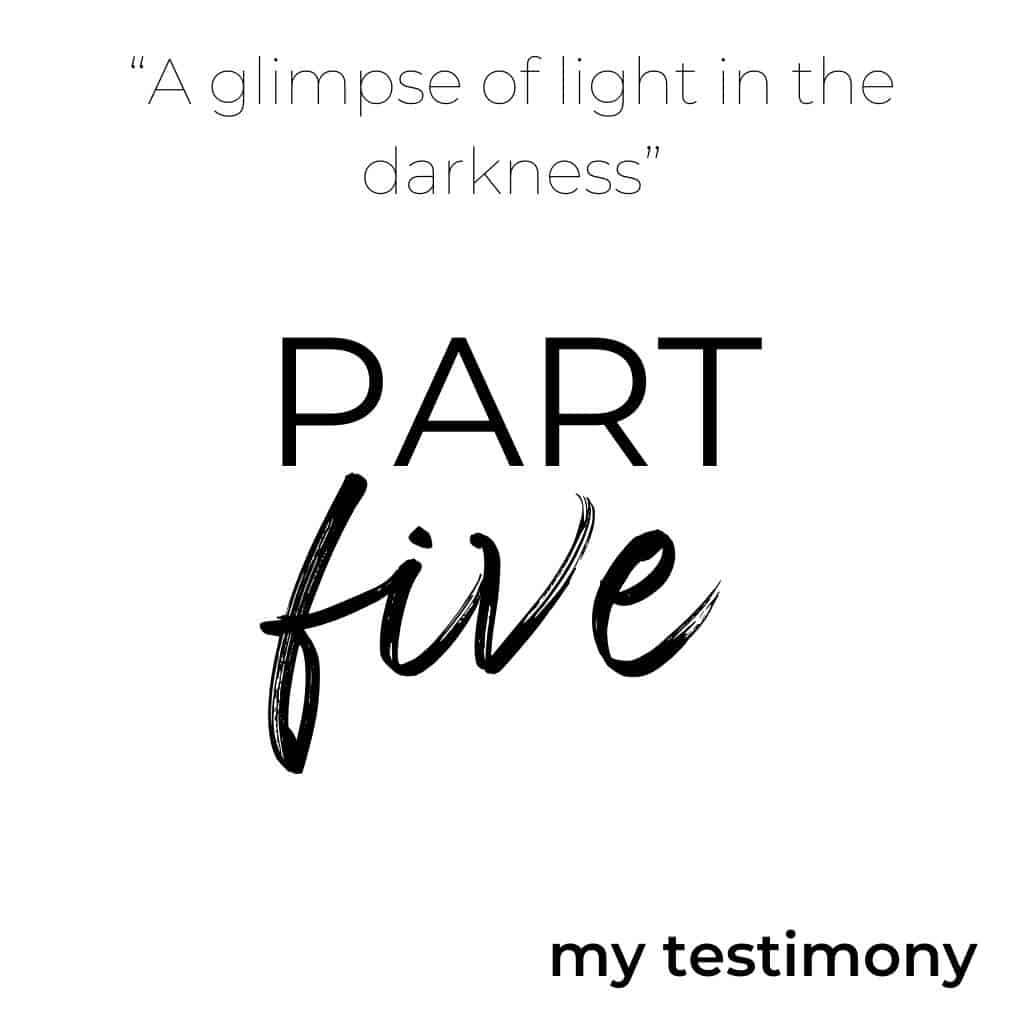 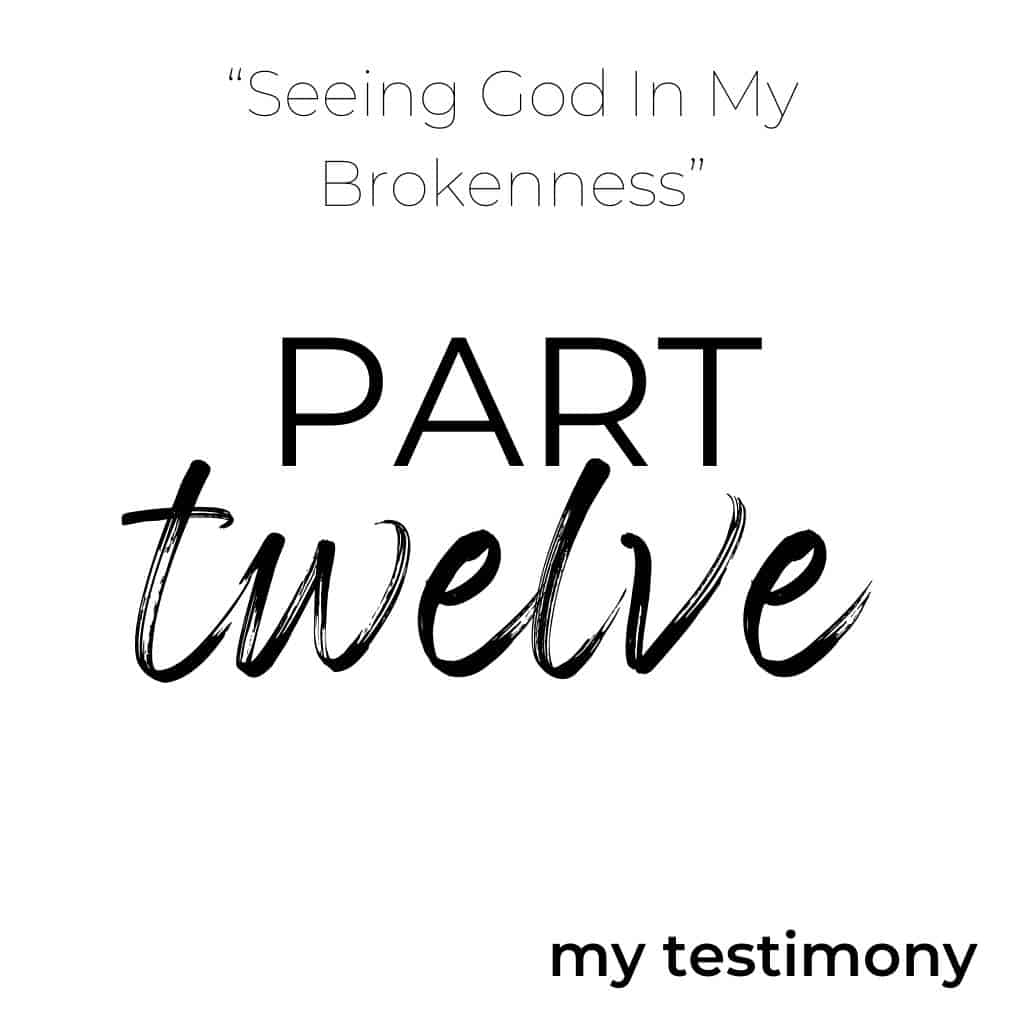 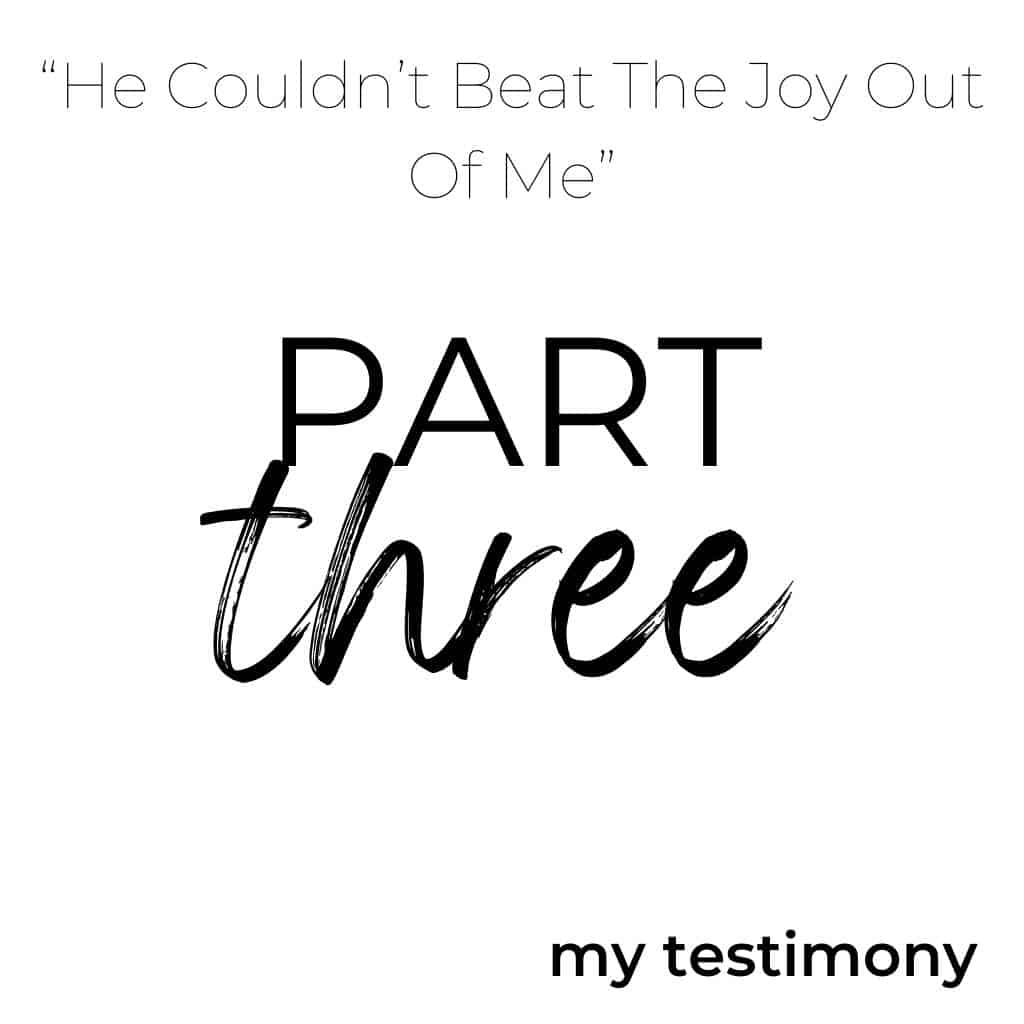 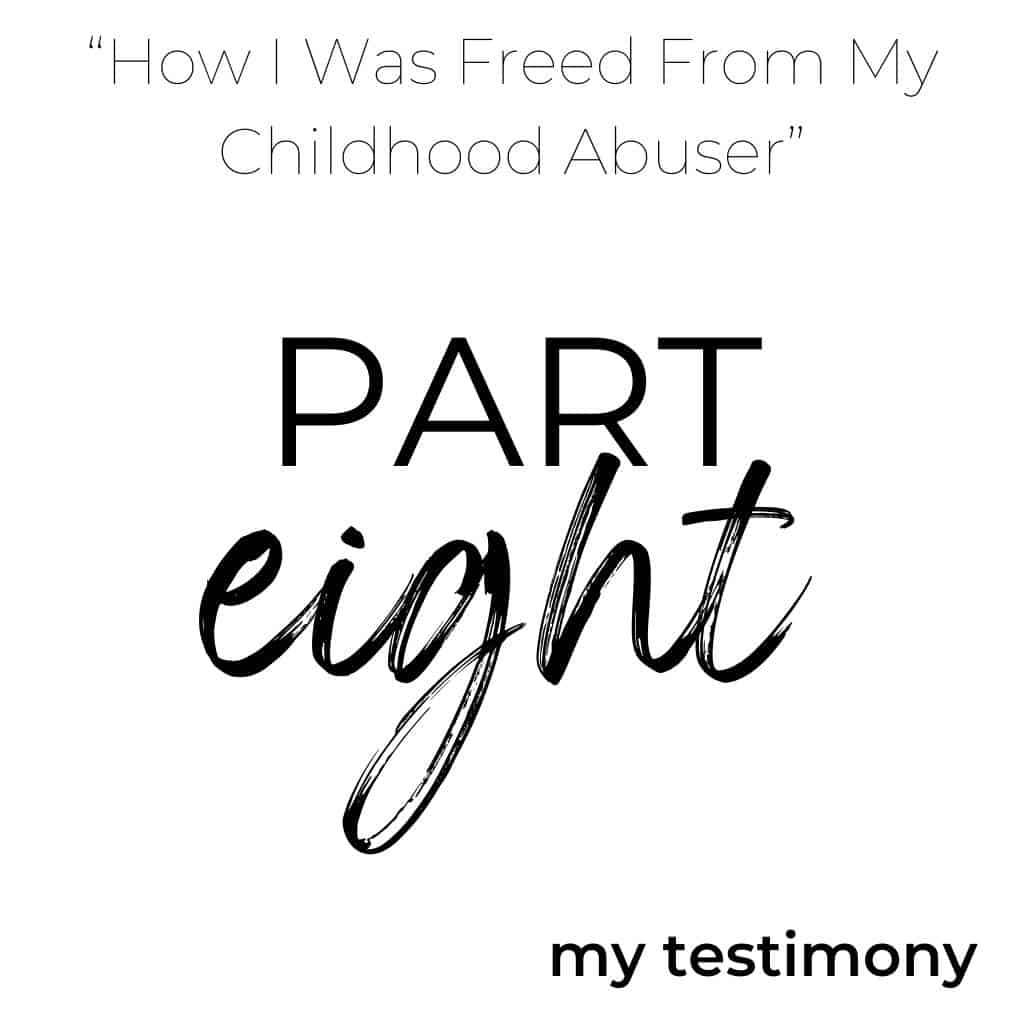